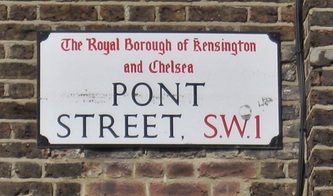 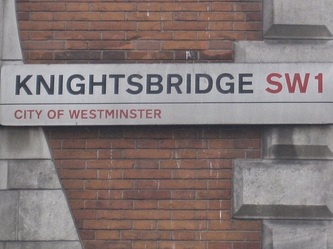 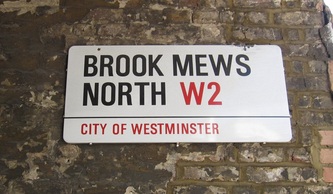 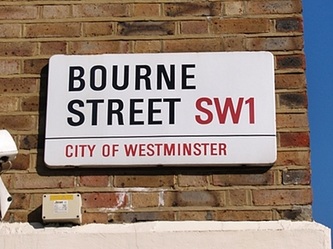 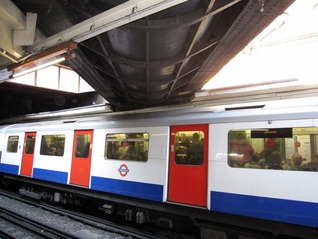 Sloane Square Tube Station
Walk part of the route of the River Westbourne and some other lost rivers of London with Paul Talling, author of this website and the book London's Lost Rivers (published by Penguin Random House). All of Paul's guided walking tours during 2013 - 2020 sold-out weeks in advance.  Click Here

Arising from  streams to the west of  Hampstead Heath, joining up in the Kilburn area with another tributary (from Frognal) called the Kilbourne and flowing through Hyde Park, Sloane Square and into the Thames near Chelsea Bridge.

The Kilbourne joins the Westbourne at the site of Kilburn Priory which dated from the days of Henry 1 and the river supplied the Priory’s moat and provided the inhabitants with water and fish until the dissolution of the monasteries in 1536 and the building was destroyed. The water from this spring was then discovered to contain properties similar to Epsom Salts and gave rise to spas and pleasure gardens including the Kilburn Wells.

The origin of the name Westbourne is not clear, and it does not appear before the 19th century. The  areas named Westbourne such as  Westbourne Grove were called that as they lay west of the bourne or river. The river itself was named Bayswater Brook in a London map dated 1824 and named the Westbourne later on. The name Bayswater is said to have derived from 'Bayard's Watering Place', first recorded in 1380, where the River Westbourne passed under the Uxbridge road (now Bayswater Road), a ‘bayard’ being a horse which would have taken water from the river. Another explanation is that he land now called Bayswater belonged to the Abbey of Westminster when the Domesday Book was compiled; the most considerable tenant under the abbot was Bainiardus, may therefore  be concluded that this  ground known for its springs of excellent water, once supplied water to Baynard, his household, or his cattle; that the memory of his name was preserved in the neighbourhood for six centuries; and that his watering-place now takes the abbreviated name Bayswater.

Two other crossing of the Westbourne are documented and quite infamous in their time: Knightsbridge and Blandel Bridge. Knightsbridge to the south of Hyde Park was a stone bridge and  the habitual haunt of highwaymen and robbers for centuries. The bridge is reputed to be named after a duel between knights. It is recorded that, in the year 1141, the citizens of London met Matilda of England at this bridge.

The bridge at Sloane Square was called Blandel Bridge and was later renamed Grosvenor Bridge. It was nicknamed “Bloody Bridge” going back as 1590 so named allegedly following the murder of Lord Harrington’s cook who was attacked and beaten to death by highwaymen. Bloody Bridge once comprised of a footbridge with a plank before a more substantial bridge, 16 feet wide and lined by high walls, was built in the reign of Charles ll.

The Serpentine, was formed in Hyde Park in 1730 by the damming of the Westbourne under orders of Queen Caroline - wife of George II – to increase the aesthetic qualities of the Royal Park. Although in 1834 the Westbourne became too polluted and the Serpentine is now supplied from water pumped from other sources.

The Westbourne also supplied the ornamental waters in Kensington Gardens.  A tributary called Tyburn Brook, joined the Westbourne from the east in Hyde Park is covered elsewhere in this book.

The waters of the river were originally pure and in the 13th century conduits were laid to carry water from the Westbourne into the City of London, for drinking. In the nineteenth century, however, the water became filthy and impure as it was by then being used as an open cesspit. Due to the development of the area and the need to hide this cesspit in what was becoming quite upper-class vicinity the river was culverted between Hyde Park & Sloane Square in 1827 and the stretch down to the Thames in 1854. Parts of the river north of Hyde Park survived until 1871. The culvert is now known as the Ranelagh sewer and the outfall can be seen at low tide on the Thames. Noise resulting from its encasement in a sewer has been blamed for instances of alleged haunting in the cellars of houses in the Sloane Square area. The Westbourne/Ranelagh Sewer can be seen at  Sloane Square Tube Station where it crosses the track in a large metal pipe.
John Quinn writes to this website and asks:
"At the top of Moorhouse Road just before Westbourne Park Road was a narrow pedestrian access to a large Square. Bounded by Westbourne Park Road St, Stephens Gardens and Ledbury road (knocked down in 1974). This pedestrian access was always a bit smelly and climbing over a wall my memory was of flowing open water.could this have been the Westbourne?"
​That location is slightly west of the main route of the Westbourne but sounds like it could have been one of it's many minor tributaries.