The Peck, a tributary of The Earl's Sluice, rose between One Tree Hill in Honor Oak and Peckham Rye and drained into the Sluice near Ilderton Road (adjacent to South Bermondsey railway station) the Sluice then drained eastwards into the Thames at Deptford.

The name Peckham is of Saxon descent meaning 'the village of the River Peck', Peckham was the last stopping point for drovers from Kent taking their livestock to sell in London’s Smithfield Market.  Above the Saigon Bar and Restaurant on Old Kent Road there is a shabby but intriguing mural  of rural scenes and herds of cattle and ducks beside a windmill. This building was once a pub called ‘The Kentish Drovers'. A pub of this name stood on this site for over 3 centuries.

In May 1602, Elizabeth I picnicked by an oak tree at the summit of  One Tree Hill. The tree came to be known as the Oak of Honor. The present tree surrounded by railings was planted in 1905 and a successor to the historic one. This tree is in the vicinity of the highest source of the Peck.

The only remaining above-ground section of the River Peck (or at least tributary rivulets of the said river) is in Peckham Rye. It was here in 1767 that poet William Blake had his vision of “a tree filled with angels, bright angelic wings bespangling every bough like stars." During holidays the common was so popular, it became dangerously crowded, and so the adjacent property of Homestall Farm was soon purchased and opened as Peck ham Rye Park. During the Second World War, temporary huts were erected here to detain Italian prisoners of war (one still remains, next to the café)

There's nothing to be seen of the stream after it deviates from Peckham Rye & can be best followed as the parish boundaries separating Deptford from Camberwell and Bermondsey. The spot where the three parishes meet is also where the Peck joins the Earl's Sluice.

The main part of The Peck was enclosed as the Earl Main Sewer in 1820-3, but the section nearest to the Old Kent Road remained open until the 1830s.

The Kentish Drovers mural on the Old Kent Road
John Hawkins writes to this website:

"When I was a child in the 1950s, my father pointed out a tributary of the Peck down the side of the main road, the B219 Peckham Rye, as it approaches the A2214, East Dulwich Road. Today, you can still see the depression in the park alongside the road.

Later, when I used to wind the clock in St John's Church, Goose Green, the Vicar showed me the start of another tributary.The church was built on a piece of ground where a spring rose. The spring now bubbles up into a sump in the church basement, and from there it is pumped up into a culvert and flows underground to join the Peck somewhere in Rye Lane Peckham.

In the 1940s, an Aunt used to work as a barmaid in a pub called The Montpelier Arms, Montpelier Road, Peckham. In the cellar was a gulley with this tributary flowing through. It probably still does." 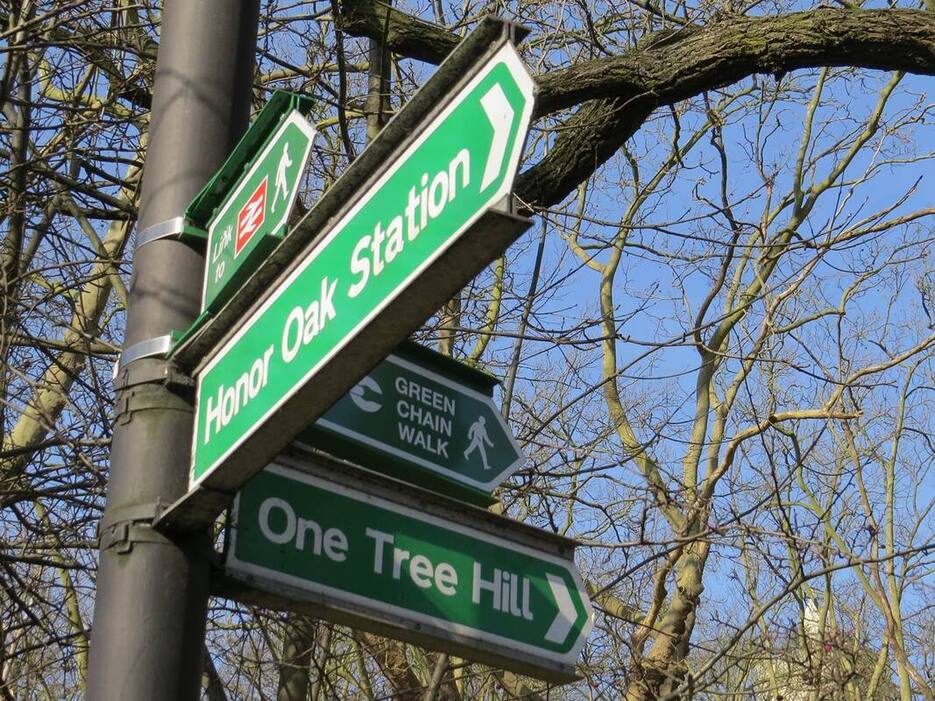