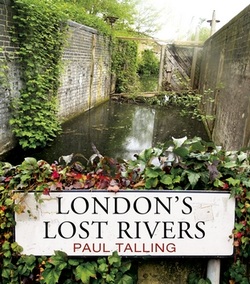 We’ve all heard of the River Fleet, right? Some of us have even paddled in it. Many will also know of the Tyburn, Westbourne, Hackney Brook and Neckinger. But have you ever encountered the Black Ditch or, right beneath Covent Garden, the Cock and Pye Ditch?

A new book from Paul Talling (you may remember him from such works as Derelict London) gets down and dirty with the capital’s ‘lost’ rivers. Even if you’ve previously dipped your toe into the subject, you’ll find much of interest here.

The format is spot on. Short bursts of text describe the tell-tale signs (look for ‘stink pipes’, sloping roads, and the sound of gushing water beneath manhole covers). Each watercourse is accompanied by an excellent selection of photos taken by the author.

Stretching the title somewhat, almost half the book is given to vanished canals and docks. No bad thing, as the same emphasis on spotting remnants is rewarding here, too.  Clearly, a decision was made to only include waterways that are now completely or wholly invisible at surface level (i.e. ‘lost’). Hence the absence of the New River, the Ravensbourne, Wandle and Hogsmill, for example, which all retain lengthy open sections.

There’s plenty of competition in this watery space. A book of the same title, by sometime Londonist contributor Tom Bolton, is due out next month. A scholarly account of similar name has been around for years. Many of the rivers have been covered online by Diamond Geezer, and we’ve personally traced the Tyburn, Westbourne and Peck.  Talling’s highly visual, fact-packed, waffle-free account is the freshest take we’ve yet seen. A must-buy for anyone who enjoys the ‘hidden’ side of London.

"The pictures are incredibly good, they are very very powerful images that kind of draw you in"  SIMON LEDERMAN
"Im completely fascinated by this"  GABY ROSLIN
"I love the juxtaposition. This is what I love about the book. Im amazed how you find these places - you open up an area that no-one else has tapped into."   JO GOOD

A book packed with fascinating facts and eye-catching photography , Talling explains the history of landmarks like Holborn Viaduct & the Serpentine lake as well as little known watery facts

Paul Talling drills deep beneath the modern city to show how the lost riversof the capital have left  their mark, even telling how certain areas take their names from the rivers that once flowed nearby...

A fascinating and stylish guide to exploring the capital’s forgotten brooks, waterways, canals and ditches, including an array of sluices, healing wells and stink pipes. Trace the sources of the River Fleet in Hampstead’s ponds or the almost-invisible progress of the River Effra through Brixton and Vauxhall. Packed with photos and helpful maps, it’s a terrific book.
Reviews of Paul Talling's  Derelict London:

"Those of us who like to explore the capital's hidden corners and forgotten byways can only applaud Paul Talling for compiling derelictlondon.com, an often uncomfortable record of the capital's underbelly.We see them every day: the disused cinemas, boarded-up shops, vermin and even human derelictsthat society would rather turn a blind eye to. They may be less picturesque than Big Ben, Beefeatersand the London Eye, but they are no less part of London. Once you start noticing them, you just can'tstop.I can't quite bring myself to look at the toilets, though."
THE GUARDIAN

"Author, Paul Talling, prowled the metropolis for five years photographing the wretched,the ramshackle, the tumbledown and the downright sinister. From the forlorn suburbanterraces on the North Circular Road to the creepily prison-like, rat-infested Ferrier estatein Kidbrooke, from the closed-down rock pubs of Soho to the vast disused granary (asfeatured in Ashes to Ashes) of the Millennium Mills in Royal Dock, it offers a movingchronicle of living spaces that died and, for the moment, are not being revivified."
THE INDEPENDANT

"a wonderful catalogue of the capital's social history. Shots of the old Crystal Palace, the ill-fatedTobacco Docks development and Victorian pubs giving way to Starbucks are richly evocative."
EVENING STANDARD

"There's nothing shabby about Derelict London, a thoughtful compendium of unloved andforgotten buildings, the necrotic ulcers in London's hidden underbelly. Photos from theauthor, some taken in locations where we wouldn't want to risk an expensive SLR, arebacked up with illuminating research and tip-offs from fans of his web site."
LONDONIST

"The book is a belter. What we call in my house a Velvet Underground - a great Loo Read"
PAUL ROSS - BBC LONDON BREAKFAST SHOW

"The seedy underbelly of one of the world's most regal and outwardly pristine cities is exposed to all in this poignant depiction of London'sdecidedly unseemly parts. Londoner Paul Talling has created a record of his many walkabouts and fashioned a rare portrait of the posh city that cannot be seen via public transport or guided tour. By foregoing the usual palatial pomp and circumstance and heading straight for the gutter shot, a grittier and more vivid (dare we say more interesting?) London emerges. Her abandoned cinemas and forgotten hospitals loom with quiet majesty, while her shoddy domiciles, unkempt corners, and pubs gone bust reveal an aging grand dame's "liver spots." Yet, even at her worst, London retains a hint of the glory we're more accustomed to seeing"
YAHOO!  (DERELICT LONDON - BEST COMMUNITY WEBSITE)

"Although it has quainter pleasures, much of the appeal of Paul Talling's excellent little book Derelict London is in how it seems to trace the skeleton of a dead city while it is still in apparently rude health.In a city so devoted to making fast money, and busily fighting a one-way class war under the rubric of "regeneration", sweeping undesirables and their buildings away to the outskirts, it is almost comforting that relics and ruins still cling on to its landscape, throwing workaday time into a spin. As much as it is an inadvertent vision of how London might look after a catastrophe, Derelict London is valuable as a document of the one going on right in front of us."
THE NEW STATESMAN